Actually, I don't know that I've learned anything from Las Vegas. I've only been as close as changing planes in the airport and I haven't even read the venerated manifesto by Robert Venturi, Denise Scott Brown, and Steven Izenour. Now we have Learning From Las Vegas, 2.0 so I really need to catch up. I am going to revisited the Venturi's in a future post and recently I did received my first commissions to create some paintings for Las Vegas so that's how I'm justifying the title of this entry. The paintings below are not for Vegas but they were my first commission for a hotel so I decided to include them here. 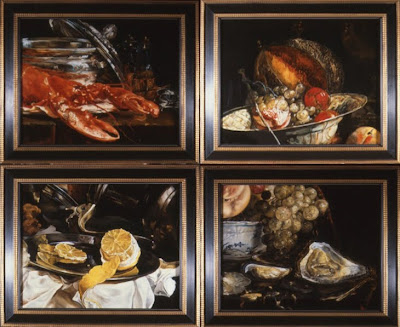 When I was in art school I often did whatever I could to avoid making anything that resembled a traditional sort of painting. That was somewhat common for the time as the art world was just shaking off the minimalism / conceptualism stronghold. Neoexpresionism was just emerging. Anyway with school behind me I almost immediately made my living as a paintbrush for hire making paintings which would have been inconceivable to me as a student. The deal was getting paid for it and the goal was to make it fun and interesting for me. 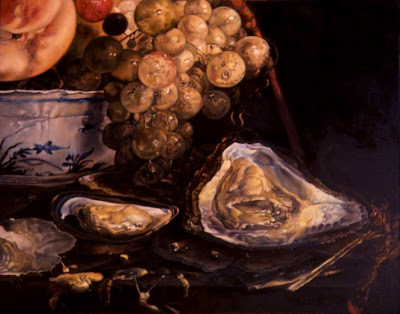 The architect, Stanford Hughes , was finishing up one of his last projects for Skidmore, Owings & Merrill which was the restoration of The Palace Hotel in San Francisco. He asked me to come up with an idea for paintings for Maxfield's restaurant. Maxfield's adjoins The Pied Piper Bar where there's a Maxfield Parrish mural. The rarefied atmosphere of the hotel suggested something historic and traditional to me and there was no directive to relate to the Parrish mural so I came up with the idea of 17th c Dutch still lifes. Exact copies seemed a little cloying so I cropped and enlarge details from a tasty selection from four different old masters. It was me challenging myself to paint detailed subject matter in oils and I had fun with it for the most part. 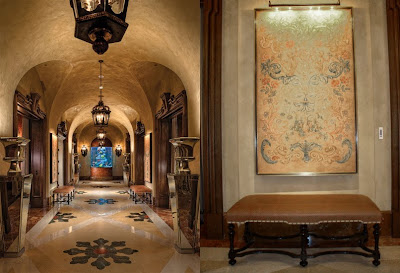 Las Vegas is suppose to be fun for the most part and escapist. Part of the escape is by virtue of historical and iconic sampling in the hotels' architecture and interior design and I added to it. I got two Vegas commissions back to back. One commission called for 10 separated panels and three distinct skill sets. There was a pair of gold leafed panels that I art directed and subcontracted out because I don't trust myself with that much 18k gold leaf. I had to paint six 10 foot panels each with three classical Roman figures. The panels were awkward to handle because of their sizes relative to my studio space. The third piece, a pair of paintings meant to resemble Italian Renaissance tapestries, made my knuckles bleed. How fun is that? 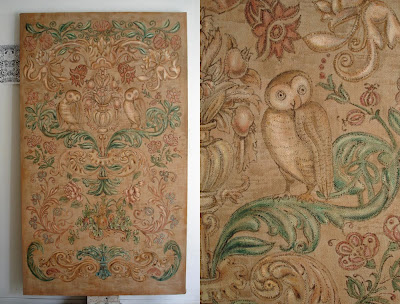 The one commission that consisted of three separate projects is in an apartment that rents for $300,000./night. Can you imagine? It's part of the Octavius Villas complex at Caesars Palace designed by Wilson and Associates . If you stay there you're suppose to imagine you're a Roman emperor, or perhaps William Randolph Hearst, Sean Combs? It's not my crowd for sure.

The gold leaf panels are nice but not terribly interesting so I'm not including pictures of them. I'm glad to have made the acquaintance of a good gilder should the need arise in the future. I have worked on top of silver leaf and there is something wonderful about those metallic surfaces. The next time I work on a leafed surface I want to use radical imagery, expressionistic, insouciant. Who's going to pay for that? I'm not sure, perhaps me.

So I did the historicist's works for Las Vegas and another commission for a large abstract canvas. That piece is installed at the Madarin Oriental in CityCenter . My last post was about Hong Kong and work I did there. Hong Kong is adjacent Macau which is essentially Vegas for China. There's the through line. The funny thing is that my painting for the Mandarin Las Vegas like my painting for the Chinese client in Hong Kong is not in anyway related to The East. Or maybe it is. It's definitely related to Santiago, Chile and I'll explain later.
Posted by Scott Waterman at 6:31 PM