Beyond The Silver Screen

Previously on Corbu’s Cave I presented a mural in a movie. This post isn't about that but I’m starting with a reference to a mural in a movie nevertheless. The movie is Star! which includes exuberant murals for one particular set. It’s room, a large room, decorated with a shiny mural. I painted a large room with a shiny mural. That’s the connection.

My project was large enough that by the time I was comfortable in the process my mind wandered to other possibilities given the same materials. The painting I was doing was rather precise so I couldn’t help thinking of a radically different approach that also would be stunning on silver. I thought of Cy Twombly’s elegant, scumbling, rude, mark-making. The murals in Star! hardly compare to Twombly's work and yet they have expressiveness and energy that’s a little wild and I like that. 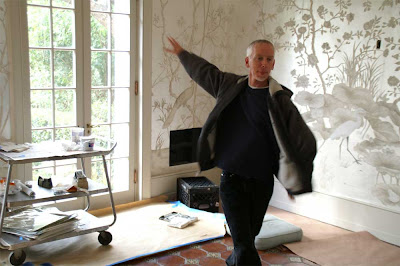 Some of these painting jobs of mine are so involved they’re like a making a movie. One morning I got a call at 9:00 asking if I could meet at 11:00 on the other side of town. I scrambled to get it together for a pre-production meeting where I met for the first time, the builder, the client, the architect, and the designer. I knew ahead of time they were interested in some sort of chinoiserie mural but because that’s open to interpretation I was basically just pitching myself - that I was the one for the job, whatever it was. When I finished showing my portfolio Marc Appleton , the architect, immediately got me a set of plans and elevations. I felt that was a good sign and it turned out to be. 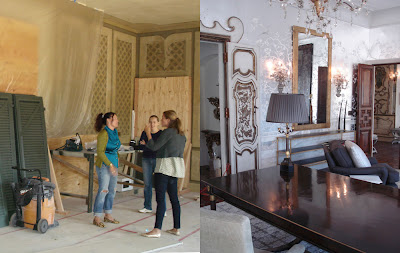 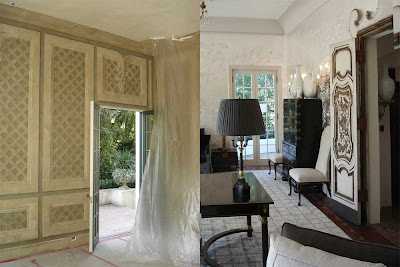 First sight of the room where I was to work was a bit chaotic. There were rough-around-the-edges doorways cut into what was left of Garth Benton’s trompe l’oeil work. (Benton painted the murals at The Getty Villa.) The garden trellis painting was nice, well executed, but perhaps too literal, too heavy. In my version it’s still a garden room but a fantasy version floating in cloud.

Windsor Smith, the designer, expected a lot and there’s nothing better than that. "Through all the world there goes one long cry from the heart of the artist: Give me a chance to do my best." I always remembered that quote from Babette’s Feast. It was a leap of faith on the Windsor’s part since I didn’t have anything in my portfolio quite like what she had in mind and we’d never met much less worked together before. On the other hand diversity is the modus operandi in my commission work so I took in stride. She gave me parameters, a vocabulary of imagery and palette, and instructions: make it great. 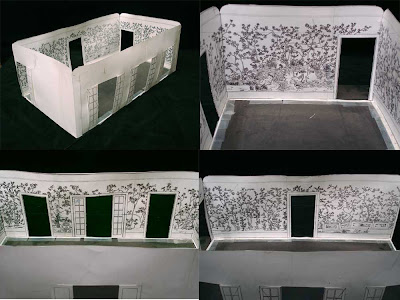 The first step was essentially to create a story board, just like a movie. I had to design a different scene for each wall and make certain the imagery had continuity around the corners. This I did in Photoshop and printed my work on cardstock to make a maquette of the room. It was my map to get me where I needed to go. I also did some test painting on the substrate, which was silver leaf on silk backed with paper. The desired effect for the paint was a matt finish. For practical reasons I used acrylic paint and mediums but I added diatomaceous earth for a flat gouache like appearance. 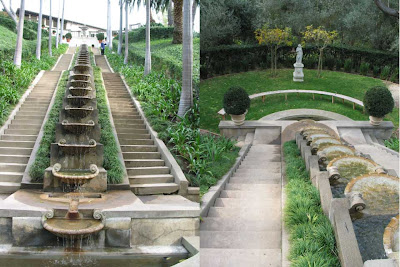 The pre-production phase can be a little frustrating because it looks like not much is going on. Even when I began the full-scale work the first step was to draw the entire room in pencil, which was practically invisible to the casual observer. Once the painting began I think Windsor breathed a sigh of relief and realized she could leave it to me. The room became my domain until I finished. It was a pretty special job site to come to everyday. Throughout the day the silver bounced light around that streamed in through the French doors. Like a sunny day being inside the room was a total mood elevator. My assistant and I would take our lunch by the pool or sometimes in the hillside garden where we may as well have been in Italy, a pretty fabulous environment all around. 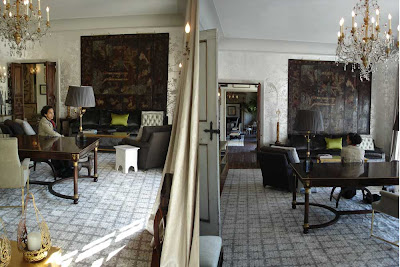 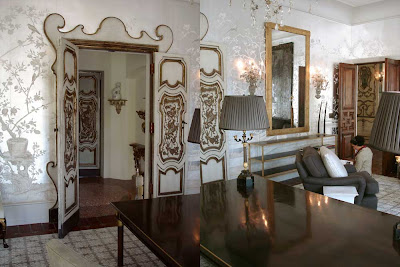 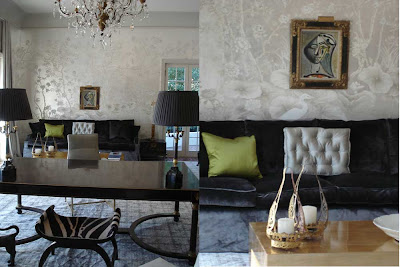 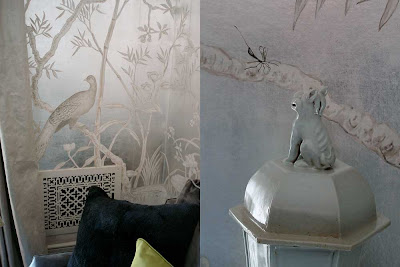 The principle painting took about a month during which time I didn’t really know what was happening in the room next door, the ballroom. Can you imagine? Who has a ballroom? It was a big cold room and I kept the door to it closed. In the end it seemed to spring to life practically over night and felt like a wonderful extension of the garden room dream. They're both so photogenic like something out a movie.

Hand painted Chinoiserie murals can be ordered through some wonderful old bespoke companies but you wouldn't get anything like the one I produced. I think those mail order murals tend to be rather rote since they're produced in a factory-like assembly line. My work always has a sense of search and discovery and of course wabi-sabi. If you know exactly where you'll end up when you start out what's the point of the journey?

Posted by Scott Waterman at 8:39 AM