Among the choices for in seat entertainment I instantly decide:  none of the tension filled ones, I’m tense enough flying, thank you, which left The Wizard of Oz, among other movies. It is unquestionably a great film due in no small part to the fabulous sets designed by Cedric Gibbons. The awesome parabolic hallway leading up to the Wizard’s chamber alone could have inspired the entire career of Santiago Calatrava.


Little did I realize as I viewed the movie that the very next day I would casually glance out the window while speeding along the highway from Lakeland to Orlando and see Calatrava’s ISTC Building at Florida Polytechnic University. But I’m getting ahead of myself because the point of the trip to Lakeland is total immersion in Frank Lloyd Wright at Florida Southern University where they proudly tell you, here is the largest collection of FLW’s buildings on earth.

Not to be overwhelmed we will begin the tour with Wright’s modestly sized Usonian House, a full scale model of what was intended to be housing, (twenty or so),  for faculty at the college to be built on the perimeter of the campus. The contemporary administration at FSU discovered plans for the Usonian House six years ago and had it constructed three years ago.


Why were they not built in 1939 when Wright’s designs for other campus buildings were erected? The answer to that is lost in time though undoubtedly money was a key factor. In fact the Usonian House was meant to be affordable, the everyman house, but probably owing to the fact that FLW insisted on a high level of craftsmanship this concept never panned out and the stripped down ubiquitous American ranch house took its place. 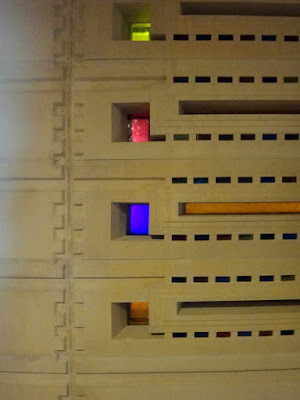 Today there are a number of Usonian houses scattered around the country. I first learned of them when I lived in the Bay Area and visited the Marin Civic Center to see a Usonian built as part of the exhibition, Frank Lloyd Wright: In The Realm of Ideas February 16 - May 13, 1990. And there is one here in L.A. which has recently come on the real estate market. Actually it’s going up for auction 2/21/16 with estimates $2.5 - $3 (million, don’t you know).  It’s known as the George Sturgess House but was owned for years until his death in 2015 by Jack Larson, an actor best known for playing Jimmy Olsen in the Superman TV series. I was kind of shocked by his death, actually, because I used to see him at art openings and he looked the picture of health.


The tour of the Usonian House at FSU consisted of three, me and my parents. The tour guide was informative, friendly, brief, and at the end of the tour she left us alone to watch a video and spend as much time in the house after that as we wished. What other FLW building gives you that kind of freedom? My guess is none. Similarly the buildings on the campus are mostly open and one is free to walk around at leisure. It’s an amazing opportunity for an aficionado of Wright. Amazing. You’re welcome and thank you!

(Next post: more pix including some of the 1939 campus buildings)
Posted by Scott Waterman at 6:21 PM No comments: