Santiago, Chile; Las Vegas; and Carmelo. Uruguay. What do they have in common? They're all locations of some of my site specific overscale paintings and a triptych. See them and more on my newly expanded site. https://lnkd.in/dwryYTRh

Posted by Scott Waterman at 8:12 AM No comments:

To be honest the Diptyque email was barely saved from my trash folder. I was sure it was some kind of scam as it was international, came with attachments, and a text that launched into an improbable story. In fact, looking back on it, the whole thing seems like a dream.  Fly from L.A. to New York and paint a mural thought up in a Parisian design studio in an interior designed by a London architecture firm. The thing is all my projects have a slightly preposterous quality. Needless to say once carefully read I realized this email was completely legitimate.

George Haussman gave Paris the look we associate with Paris and the Prince Street Diptyque interior was conceived of as if it were a classical Haussman apartment albeit with some ingenious twists. That includes my mural which at first glance looks like a maniacal kid ambitiously scrawled on the walls, even part of the ceiling. But if you’re thinking Cy Twombly or Julie Mehretu you’re on the right track because these ambitious scribbles are in earnest and the height of sophistication.

It’s the whole package. The mural, the chic urbane interior architecture, the coveted corner shop at Prince and Mott in Nolita, it all works together so beautifully which is why I said yes to the project. It’s atypical for me to paint a mural not of my own design or at least as a collaboration but I was sold on the idea especially given the 3D rendering. The inspiration is from an original sketch by Desmond Knox-Leet, the painter and one of the founders of Diptyque. And the notion of taking his scratchy little jot and rendering it mural size: brilliant.

Metaphorically like a diptych they live side by side; my commission projects and my studio practice as a painter. I take techniques and ideas I develop in commissions and use them in my own work and vice versa. Sue and I established a procedure and found tools specifically for the Diptyque mural. The project was recreating Desmond’s work though it could have been based on one of my own gnarly paintings/drawings. It’s my working method to make a watercolor sketch to scale when planning a mural commission so I think of all of my work as potentially panoramic. Scrappy sketchy scrawls, check, I’ve done that. You have a wall; I have an idea.

Posted by Scott Waterman at 9:08 AM No comments:

I'll Be Your Mirrors

Paintings for sale. For the first time ever I've got paintings online for sale. I'm calling the collection, The Villa Mirrors. Some I've sold to private clients, a couple are in a restaurant in Charleston, S.C. and one hangs prominantly above the mantle in the main salon of the Villa Feltrinelli in Lago di Garda, Italy hence "The Villa Mirrors". While they last The Villa Mirrors are for sale on my webpage 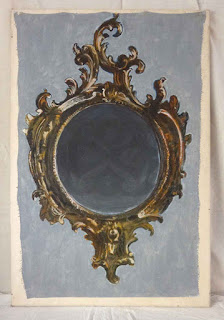 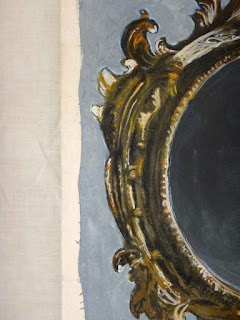 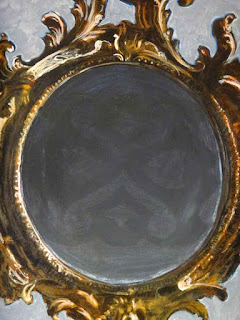 Posted by Scott Waterman at 1:20 PM No comments:

Return to the Scene of the Rhyme

I’m back! I’m back in Palm Beach at Bricktop’s restaurant with another big bird painting. That’s what the employees call it, “Big Bird”, and presumably they’ll call my second painting: “Big Bird 2” because it is a painting of a big bird too.
My first one was a popular hit and there was immediately talk of painting more but here we are, it’s taken four years to get an order for a second one. Like the first it is an homage to Audubon and his “Birds of America”. The idea was to take a John James Audubon bird as subject matter but render it with a twist.
With that assignment I immediately thought of the contemporary artist, Walton Ford, because he’s made a career of that sort of thing. Except I didn’t bother to reacquaint myself with Ford's paintings so my results are hardly anything like his and I’m glad of that. Both my paintings combine a sort of serious fauna study with some playful and absurd representations of life in South Florida.
And by the way the second big bird isn’t even based on Audubon, rather an image I found in the Biodiversity Library. Still it looks like an Audubon. Sounds like an Audubon? Let’s say is rhymes with Audubon.
Posted by Scott Waterman at 3:32 PM No comments:


Roger A. Deakins won best cinematography for Blade Runner 2049, deservedly so, probably, though Blade Runner, the original, is simply superior in every way. Every way. Los Angeles is big, a big target, so it’s quite easy to hit. Hit it. What’s more sophisticated is to capture it in an intimate way. And can we have some warmth and wit? Thank you.

Fr: Los Angeles, I'm Yours (from Her Majesty) Colin Meloy


Years ago I began a search on behalf of my power couple clients in charming Hancock Park, (a park-like Los Angeles neighborhood). I was looking for just the right imagery for a dining room mural. I like to make these sorts of projects contextual so I’m thinking: park-like, lots of foliage and bucolic. Alas nothing was sticking. Out of frustration I tried an urban view in which I had no confidence thinking it was not only not the right imagery but also too derivative of Ed Ruscha or Peter Alexander. Surprisingly they seemed to like that idea, still the project was put on the back burner and I thought completely snuffed out. In fact, I learned they’d covered their dining room in a patterned fabric. Years go by, end of story.


Last Spring, I received word, game on. No, this can’t be, I thought. Paint the urban L.A. view on top of the pattern? Ridiculous. But I went through the motions, made a painted sample and half-way through I could see it. This can work. And so it came to be. A “Little” fugue in G Minor. The yellow flower forms from the patterned fabric peak through here and there and read alternatively as a heavily body or lights from the urban fabric. And the grisaille palette derives from the grey in the substrate. And in fact my painting bears practically no resemblance to anything either Ed Ruscha or Peter Alexander painted. It’s at once abstract and evocative. Los Angeles, I’m yours. 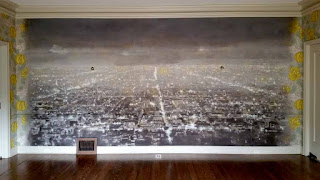 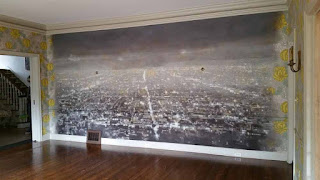 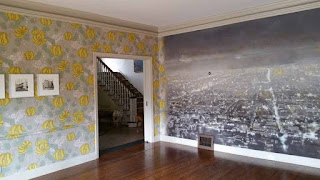 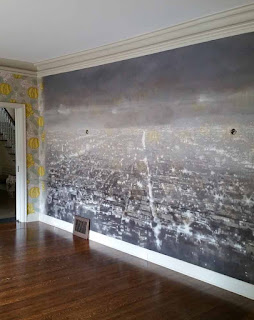 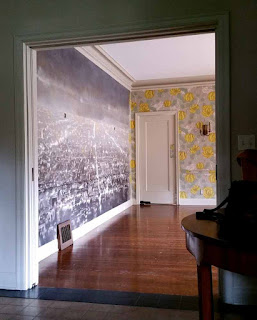 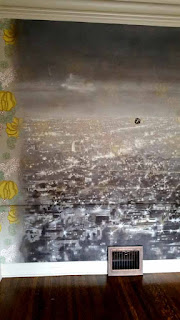 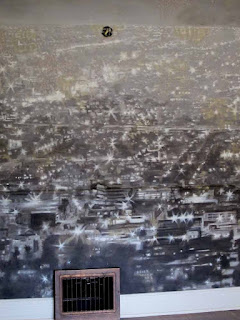 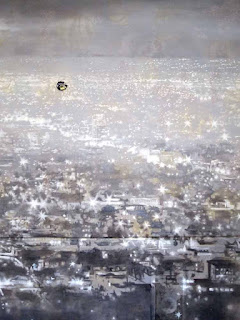 There’s something else really special about this project. I managed to get my very good friend Sue Garner to help me.  So fun.  Sue and I went to art school together and we worked on The Ponce in Atlanta but that’s another blogpost. Be seeing you.

The Folks Who Live on the Hill


Fall is always a little melancholy don’t you think? And I hadn’t really thought of it until just this moment but so are house museums because they’re not doing what they were meant to do, to be alive with people living in them. This past summer I visited where ‘The Folks Who Live on the Hill’ used to live, two house museums. One is actually called Hill House and the other, well the other was way beyond what you would think of as a house on a hill, the cliff house(s) of Mesa Verde. So in the way of a harvest for something that developed in the summer we will now take in some of what Charles Rennie Mackintosh and the Anasazi of present day Colorado cooked up. Seemingly so far apart in every dimension the more I look at them and think about them the more they have in common to me. It’s a little spooky.

The Anasazi'’s decision to leave the flat top of the mesa where they had been living, venture over the cliffs, and build in the recesses of the rock remains deeply mysterious. Why they left these dwellings in the late 1200s is also unknown so archaeologists continue to investigate this fascinating place, a UNESCO World Heritage site. I am not especially afraid of heights but climbing out of these cliff dwellings was terrifying. Satisfyingly when you’re out you get that giddy sense of having cheated certain death. Was it ever routine for the natives? Btw our guide for Balcony House kindly informed us before we descended into the dwelling that should you have a panic attack or any other kind of attack that might prevent you from getting our on your own steam a helicopter would pick you up, a $10,000. ride back to the top.


And tell me, what did you do this summer?

Posted by Scott Waterman at 5:23 PM No comments: