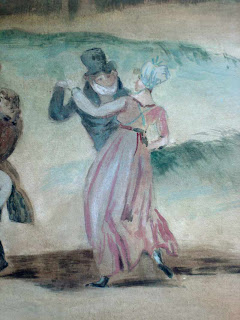 If that's all there is my friends, then let's keep dancing. 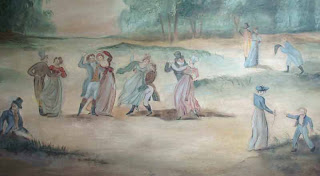 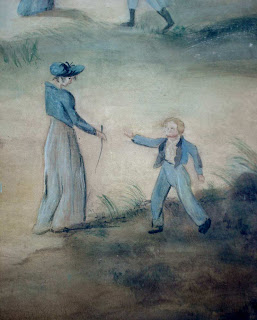 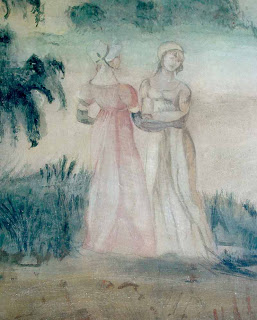 I guess in my case that would be keep painting, although, dancing may well serve as a metaphor for painting or whatever it is you have to do. I think I may have mentioned somewhere in this blog that when I was in art school I avoided painting. It seemed done, effete. 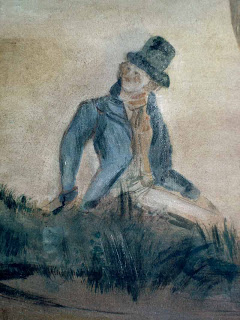 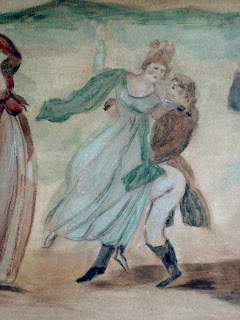 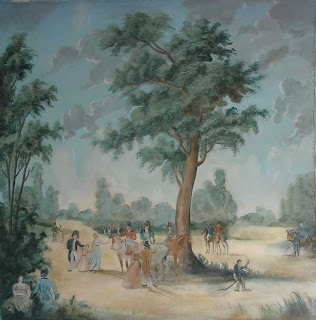 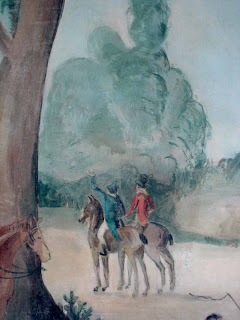 Look at these ridiculous paintings. I can't tell you much about them. They're my copies of some sort of primitive, itinerant, outsider artist's works which I created for a client of Amelia Handegan's. (I'm told they will be installed soon.) 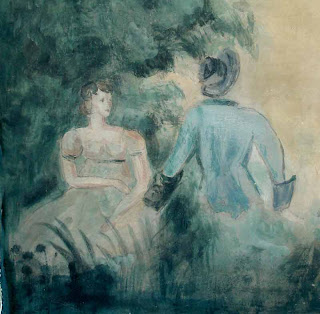 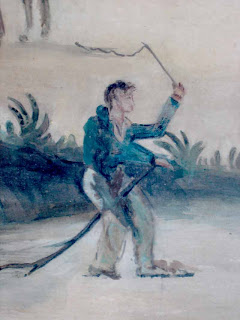 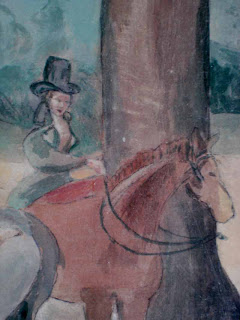 Are they 19th century? 18th? I don't know. Whatever the reference they are now 21st century paintings and they have that kind of exuberance and playfulness that we can't help being attracted to.
Know what I mean?
Posted by Scott Waterman at 11:19 AM 4 comments:

I'm walking in the dark through my neighborhood (6-6:30 a.m.) most often but on the weekends my schedule gets thrown off like yesterday. Taking advantage of the light I took my camera and went to the extremes. First stop was the Glen Lukens house by Raphael Soriano. It's quite exciting to see progress being made on this bit of architectural history. Someone's restoring it and that's a good thing. Apparently it's the catalyst that gave us stararchitect Frank Gehry.


I was taking classes at USC, summer classes in ceramics and art, drawing, art design, and the ceramics teacher -- Glen Lukens at the time -- was having a house designed by Raphael Soriano, and Glen somehow looked at me and said, "I just have another hunch." He said, "I would like you to meet Soriano," and I did, and I watched how Soriano -- a guy with a black suit and a black tie and a beret, you know -- I mean, he was a really funny guy. But there was something about it that excited me, maybe the drama of it, maybe the theater of it, and he knew what he was doing. He was very Miesian. He did very stark things, and that all excited me. Based on Glen's recommendation, I took a class at night in architectural design, and I did really well. I was skipped into second year. (interview)

Now owing to the intent of this blog the question becomes what would I do with this house as a decorative artist, a muralist? What makes sense? I'd need to know more. My commission work is tied to the architecture the setting and the inhabitants. I know Lukens was a potter with a keen interest in ceramic glazes. That's fertile ground for developing a decorative painting scheme but I also thought of the Bauhaus master Oskar Schlemmer who headed the wall painting workshop. Where he was figurative I might substitute plant imagery but I like the general thrust and can see that sort of thing working quite nicely on Soriano's building either inside or outside, perhaps both.

Now walk with me down the street and around the corner to the other extreme, an 1888 farmhouse. It's hard to grasp how little development was here in my neighborhood not to mention Los Angeles when this was built. It was nearly forty years until the much more well known Adamson (dairy farmhouse) was built out in .
It looks like the project is stalled at this point but I serious doubt David is giving up. This house is so plain spoken I'm not sure it could stand a Turkish corner like other houses of the period. Do you see that big window above the front door? That room in there. I'm thinking traditional Japanese. Something plain, minimal, and serene. Otherwise I'm just so afraid this place could turn too Pottery Barnish. Something from the land of the rising sun might be just the thing.


What would you do?


The Oksar Schlemmer idea has been hatched! I painted a children's playroom. Read all about it here:   http://corbuscave.blogspot.com/2011/06/play-room.html
Follow my blog with bloglovin
Posted by Scott Waterman at 12:06 PM 7 comments:

In This Approximately Infinite Universe

Hammer_lobby.test.03
Originally uploaded by scott_waterman
I am not a number.
Posted by Scott Waterman at 7:10 PM 2 comments:

Thomas Wright, An original theory or a new hypothesis of the universe,London 1750