Just one step inside the front door of the house and you can see a lot. 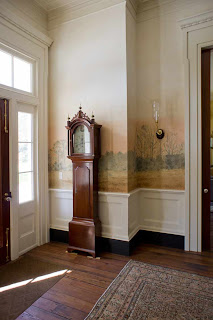 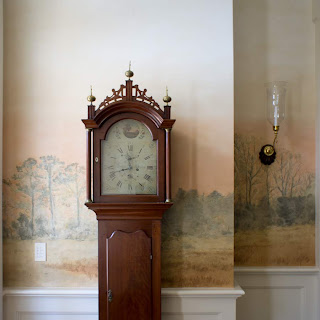 You see into the guest room on the right, through to the other side of the house straight ahead, and beyond the living room to the library on your left. And you can see some parts of all of my mural which I have divided into four main parts. In this post we will explore the living room portion. 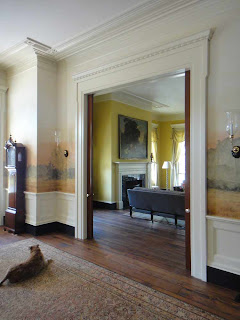 Part of the property that the house sits on is cultivated. So I depicted freshly plowed fields ready for planting and the natural forest bordering the field. 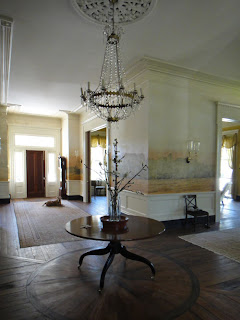 I didn't really think about it but there's poetic logic to the living room portion of my mural showing the land that gives life; food and a livelihood.


At the party given in honor of the craftspeople I met Robert and Lindsay MacLeod, Wadmalaw Island neighbors,  who are using part of this land to raise their own crops. They also happen to be the craftspeople who made the beautiful outdoor lanterns for the house. Coming up I'll show more of the outside as well as the kitchen portion of the mural.

Click on Tumblr for more pictures of this and other projects. Thanks!
Posted by Scott Waterman at 11:57 AM 8 comments:

The Library (not public)

You, my readers, are not the public. Through me you have access to this private library. Actually we're going to concentrate on the outside of this library which is the third installment of my Wadmalaw mural entries.
First, a little more about the manner in which this project was conceived. As mentioned in my last post Glen Keyes' office sent me a beautiful set of plans and elevations but these I had to adapt for my own needs. What I needed were elevations which showed me the contiguous wall surfaces so I made them myself. Even better my good friend Alix Soubiran took these new elevations and made a simple paper model for me. Now I could really see what I was dealing with.
Beyond the library walls there is water, the Wadmalaw Sound. Water, marsh, and a few trees that's the view in this direction. I placed a tree in the corner near the door to the library which has not leafed out. Somebody told me they thought my mural seemed to simultaneously depict all four seasons. That wasn't my intention but I like this idea.
What I had in mind was the time of day which is that in between time, close to sunset or sunrise. The light is low then and colors are muted. My rather neutral palette causes the mural to change it's complexion. The changing light in the hall is subtle and continuous which is partly why you see differences in my photos.

This isn't the end.
Click on Tumblr for more pictures of this and other projects. Thanks!
Posted by Scott Waterman at 8:28 PM 4 comments:

My mural is quite large so to design and paint it meant breaking it down into manageable pieces. The floor plan is simple. It's this: +.  A plus sign you might say. Simple right? Yes, of course, but there's more to it than that and anyway I'm more concerned with the elevations since that's where my mural comes in. What I soon realized was that the beautiful elevations sent to me were not quite what I needed so I reconfigured them to conform to the four quadrants of the house and named them for the rooms they defined: kitchen, guest, living, and library.
It was decided from the outset that the surrounding countryside would be the subject of the mural. I've been to and the area a number of times and have painted it too so this was familiar to me. The interior designer, Amelia Handegan, suggested I use the work of Alice Ravenel Huger Smith (1876-1958), as inspiration. I love Ms. Smith's work because she shows a strong sense of the abstract which goes beyond merely recorded information. And her work is beautiful. You can't argue with that.

The clients sent me a cache of photos taken on their property. There were a lot to choose from, some water views, fields plowed for cultivation, marshes, and wooded areas. So what shall we concentrate on? "What would you like to see", I asked.  A little of everything they told me. So here's how I approached it: if you stood in the middle of the house and could look through the walls what would you see. That's basically how I composed the mural and used each room to represent a different aspect of the low country property.
The land beyond the guest room walls is wooded and canopied with foliage. The trees are beautiful but all the other views have sky above so how could I use this view and maintain a consistent palette and values? I decided to render the forest view as if it were a misty morning with the upper story dissolving into fog. Solving  this design dilemma was the beginning for me so here in this post I present the atmospheric and ethereal "guest room" mural, one of four.
Stick with me. we're only about one quarter of the way through this project. And please remember: click on any picture to enlarge. You'll get a much better view. Next up: the library.


Click on Tumblr for more pictures of this and other projects. Thanks! 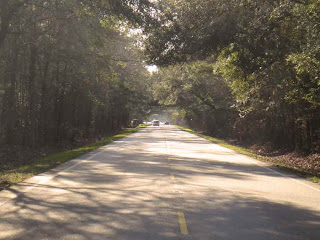 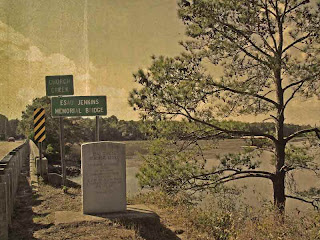 Come with me, you're my date. I'm taking you to a party and you will love it. It's down a lonely road in the low country of . We've left . We're going over the Esau Jenkins Bridge, under a canopy of old oaks, passed truck farms and down a dirt road you could easily miss if I weren't at the wheel. 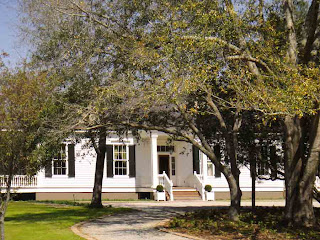 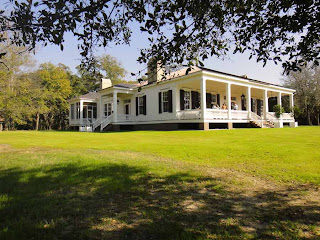 At last we see it and it looks new but is this a new house? Could be a restored Antebellum.  There are people on the porch, oh good, we're not the first to arrive. OK, let's go in. Wow, beautiful. Go on, I'm going to explore on my own. This doesn't seem to be a party where everyone congregates in the kitchen. But look there are just four rooms and this giant hallway that cuts through from front to back and side to side.

Ok, true confessions: I've been here before, just once. I painted the mural that lines the hallway. The mural was created in  but I came for the installation and now I am back for a party given by the owners in celebration of the craftspeople who put this house together. In future posts I'm going to thoroughly explore this space to show you all of my mural. I'll take you back to the studio to show you the painting process and even further back to the planning stages.
Now don't go away blog readers. This should be interesting.
Click on Tumblr for more pictures of this and other projects. Thanks!
Posted by Scott Waterman at 6:36 PM 5 comments: