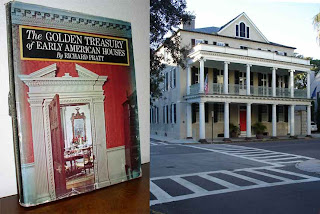 Get out and walk in Charleston and you won't be able to move one inch without stepping into history, our history of the United States, not always so united. Imagine this: in 1833 the largest railroad in the world was based in and ran from to , (no not ). Now here's where I come in: that railroad, the and Railroad Company was run by Elias Horry, the name sake of the Branford-Horry House and in the Branford-Horry House I painted Elias Horry's name on the wall while nobody was looking.

So here I am walking in on and I knock on the door of one of those beautiful old homes and what do you know, they let me in! Truth be told the charming and friendly present day owner's of the Branford-Horry House were expecting me. I wanted to see the graffiti on the bathroom wall. Ok, it's not graffiti it's my painting but owning to my usual technique of working off site I had never see the installation. I completed this project in 2002. 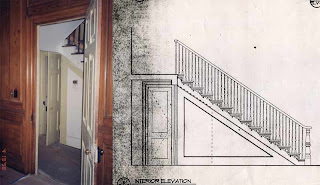 What's so wild is that I sort of grew up with the Branford-Horry House because we had a copy of The Golden Treasury of Early Houses and I use to obsess over the images in that book. Never did I image one day I'd be standing in one of those houses let alone have my painting on the walls of one. I know, it may seem like I'm making an awful lot over a little powder room tucked under a staircase but then again this is probably the most appreciated room by all the illustrious guests who visit this house made for entertaining. Yes, I think it may be the smallest mural in the smallest room I've ever painted but there's more. The owners have built a most beautiful county home out on where I have painted my largest mural yet. Please stay tuned for that. 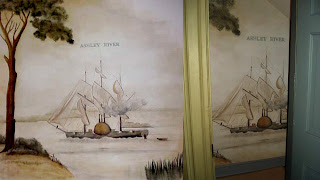 By the way if you didn't catch it in my last post Google Books has some choice pages from a recent publication called: Charleston Architecture and Interiors By Susan Sully where you can see some really nice photographs of The Branford Horry House.
Be seeing you!
Posted by Scott Waterman at 11:39 AM 6 comments:

I've just returned from a trip to Charleston and Wadmalaw Island. For the first time I was able to visit my mural installed at the Branford-Horry House (built c. 1755-ish) and I oversaw the installation of a rather large work of mine on Wadmalaw, (just completed November 2010), but I'll explore those projects in later posts. Here I want to delve into the texture of the Aiken-Rhett House, a place I visited in the late afternoon of my last day in town. 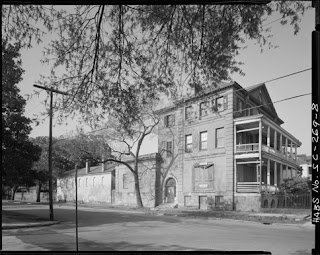 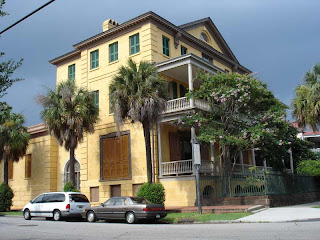 Throughout my stay I was rather engaged with the installation of my mural, making the trek out to Wadmalaw every day and wondering if I was going to see much of Charleston, the inside of it anyway. I know of and have previously visited a number of house museums in and around Charleston but there was that one that stood out in my mind. "I want to go to that run down one" I told people. Oh yes, they knew it but it was up to me to finally figure out it was the Aiken-Rhett which fortunately was just a few blocks from my hotel. 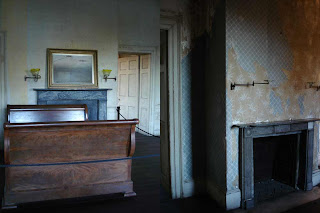 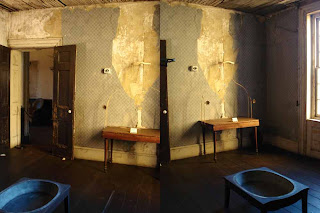 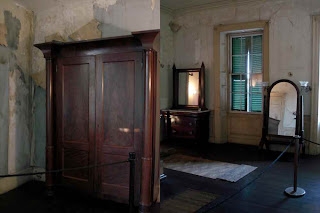 Brilliant golden autumn light and hardly anyone around to bother me. So it was a magical visit to a house that Antoni Tapies and David Ireland could only dream of.
No photography allowed so being the artist scofflaw I am set my digital camera to silent and snapped away. The place is so thrilling to me, absolutely thrilling. 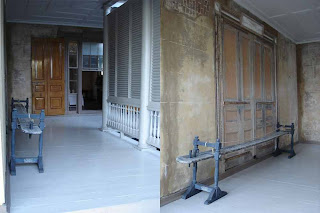 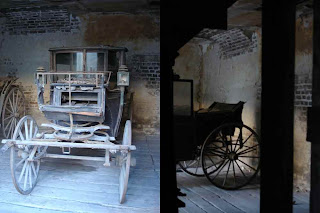 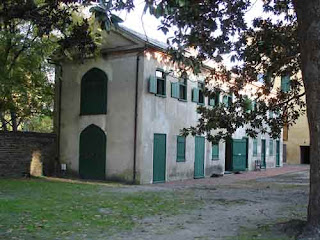 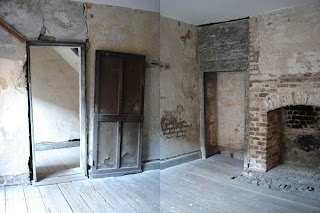 To be turned loose with a little self guided audio tour and each room I entered all to myself: I love this house! Tell me why do suppose that is?

I found some wonderful photos on the Library of Congress website.
There are a couple of excellent blog posts at a great site I just found called The Architecturalist.
And Glenn Keyes Architects had a hand in the preservation of the house. More about that firm later.
Posted by Scott Waterman at 3:31 PM 10 comments: 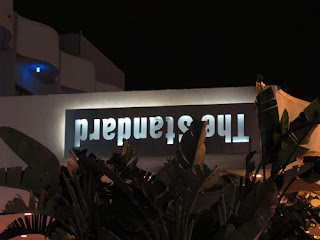 I have to admit I love that title because while it's perfectly true it sounds perversely arrogant. In some ways the painting does fit a standard, a standard landscape for L.A. There's a bit of trickery, some pumped up color, mirroring, and mandalas but isn't that sort of what you might expect from La La Land? The vast majority of Angelenos live in the flats of this big flat plane where any object of height becomes a beautiful silhouette in the magic hour while the sun sets. 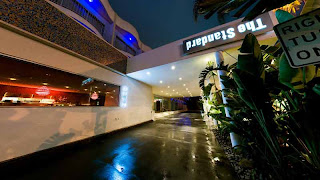 My project forThe Standard Hotel was actually  more than just a painting and like most of  my work that is designed to fit a space there was a bit of planning involved: some preliminary sketches and a maquette. As usual I had more ideas than were needed. The end result culled a picture from my archives adapted to fit the  circumstances. In this case the format was (for me) unusually narrowing and wide but it inspired me the way Hollywood was inspired to invent the widescreen motion picture. 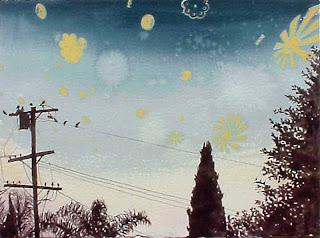 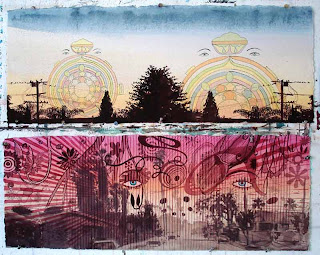 I chose a silhouetted landscape that I flipped and book matched to satisfy the proportion of the "box" at The Standard. I guess the box might also be considered a sort of cage because at night when the whole lobby of the hotel becomes a seductively lit lounge the box has a girl in it. I know. It's like some throw back to the girl in a go-go cage. Weird. The way I addressed that situation was to "peel" a layer off my painting and repeat it on the window at the front of the box. It seemed a perfectly reasonable and comprehensible idea to me but I had some convincing to do so I made a small scale model, a maquette. 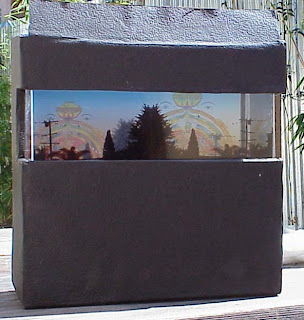 What I did was to encase the girl within the imagery of my painting. It wasn't my primary intention. I simply wanted to take advantage of the space. Even without the girl in the box the effect of repeating the silhouetted image on the front plane activated the painting especially as the viewer maintains eye contact with the work while moving toward it, away from it, or side to side. If I could show you a little video that would help. Sorry.

Anyway, I'm giving you multiple views including what I first saw. It's a nice lobby but I really thought about creating something that would draw you in, draw you right up to the reception desk where presumably you cross the conceptual threshold into another world. 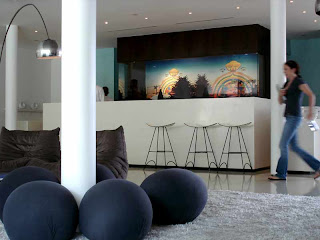 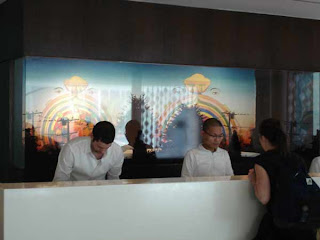 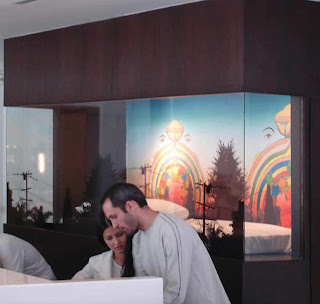 You can see the painting more clearly in my studio but I do enjoy the combination of the painting and the printed plastic with the reception box. To me it's sort of perfect in its own way. Alas the set up only lasted for a few weeks. My painting came down and the silhouetted plastic was scraped off and discarded. That's so L.A. in a way. Make way for the new. Next. 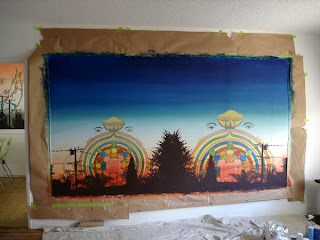 Acknowledgements:
Sarah Jane Bruce was the go between. She made the arrangements with the powers that be at The Standard.
Joanna Burke introduced me to Sarah Jane.
Posted by Scott Waterman at 8:55 PM 7 comments: