Meanwhile Back At The Ranch


Yes,meanwhile back at the ranch…

That’s what they call it, “the ranch”, well, among other things.  I first visited in the 60s, (the 6os! but I was a child,) and I've been back more times than I can remember. But it’s worth it. There’s a lot to see, too much really. Since it’s so well documented in books, online, and elsewhere I've tried to cull an idiosyncratic selection from more than 300 photos taken on this recent trip. Had an excellent tour guide of the upstairs, knowledgeable without being a "know-it-all" and able to speak extemporaneously on every question asked. Oh, and she first visited in 1963 so she has me beat by a few years. 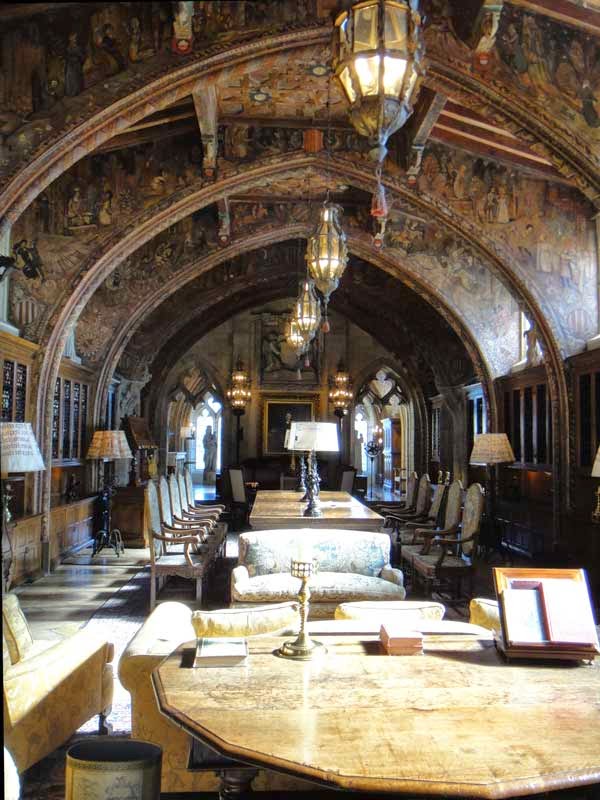 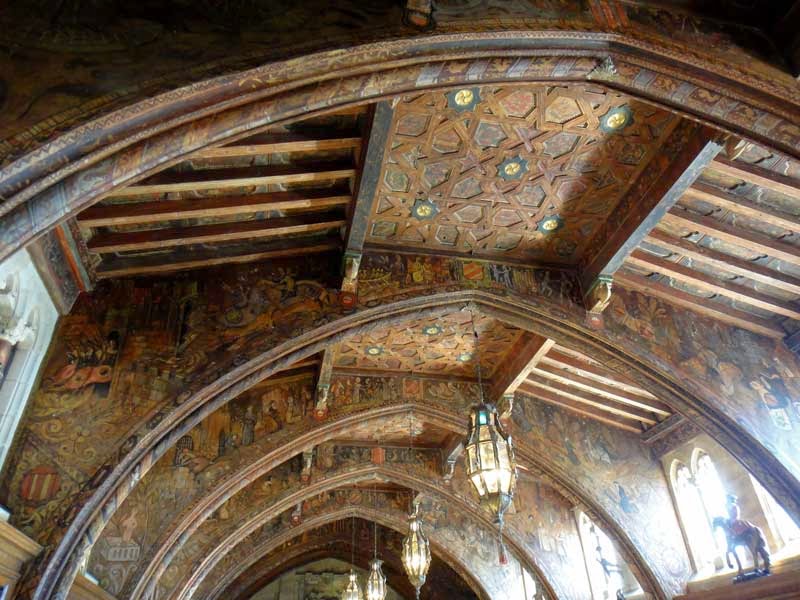 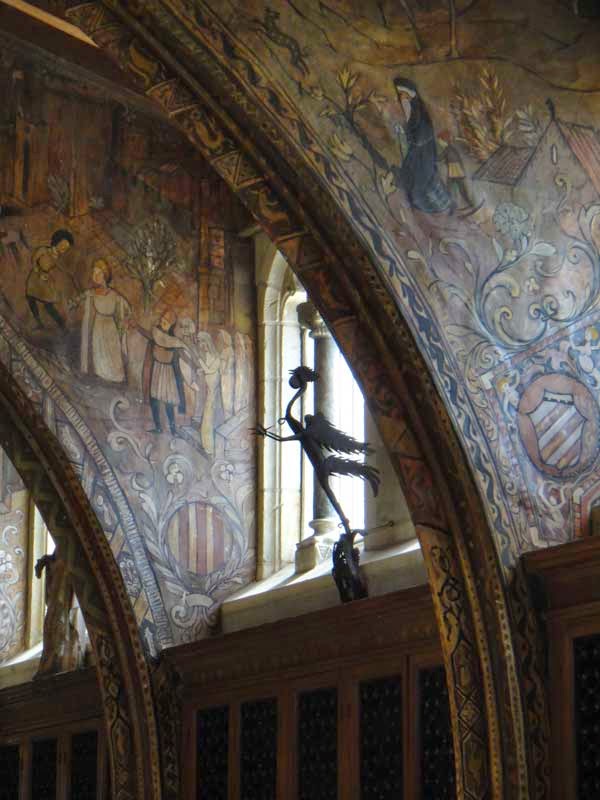 The sequence above shows what I imagine is the nerve center for William Randolph Hearst because this is the room where he reads his newspapers, probably every other newspaper as well. So he controls his empire from this room. Now notice, we start with a wide shot and finally land on details of the buttress painting. That's contemporary painting, contemporary for the time the house was built I mean. The rest of the ceiling is period Renaissance but when you zoom in on this detail it's a little amateurish don't you think? Oh well, the overall effect is right, the palette is right. Still, I wonder was this a cost cutting measure? Julia's decision or Hearst's? Certainly they could have found better painters. 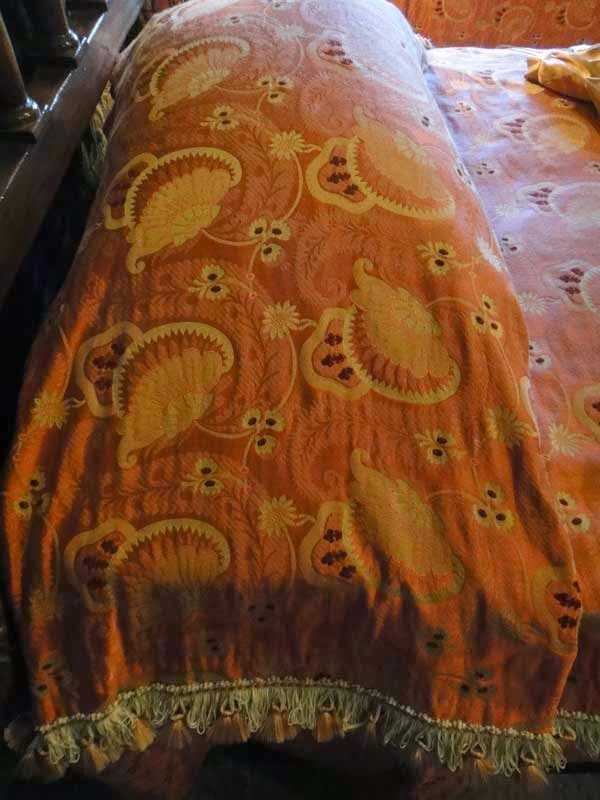 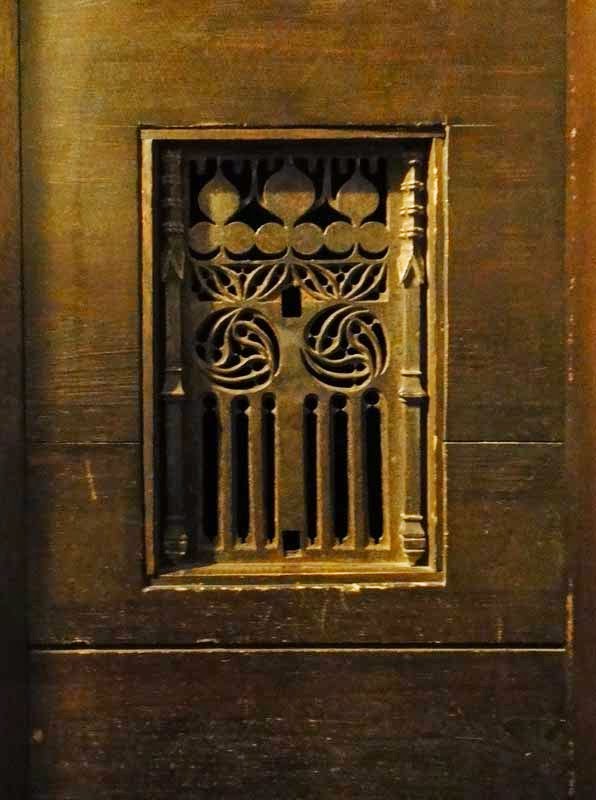 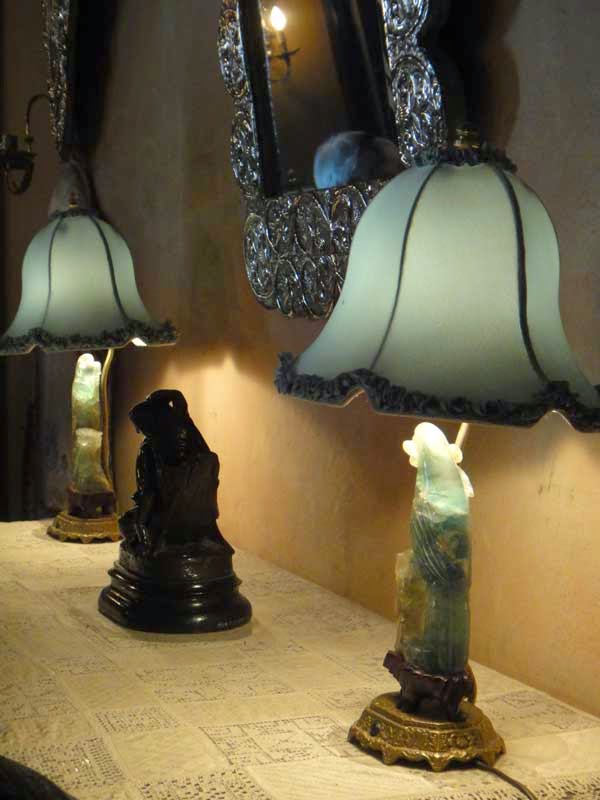 Above, random shots. I mean really. They're careful to tell you: if you think to photograph it, do, because you won't be coming back the way you came so I'm snapping shots pretty madly. There's hardly time to think and be present in the moment but you do what you can. 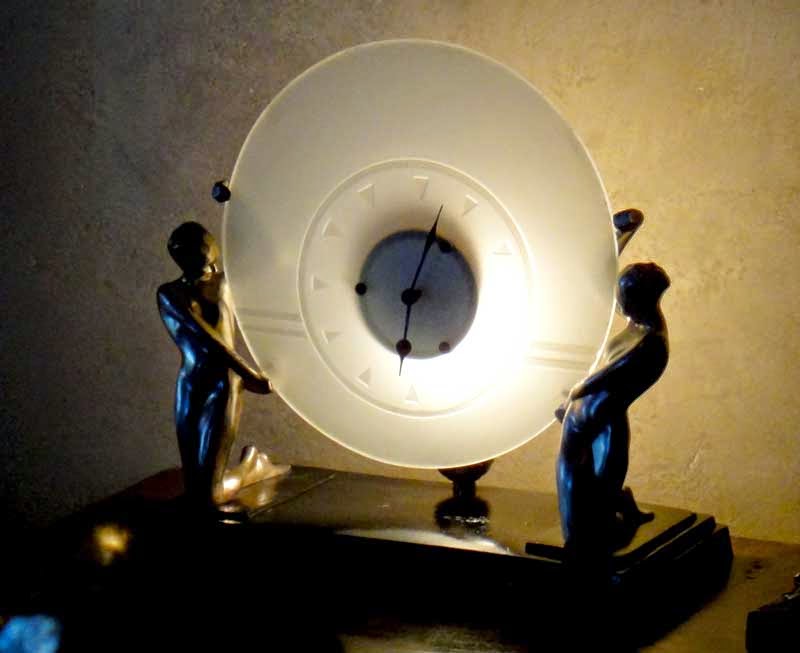 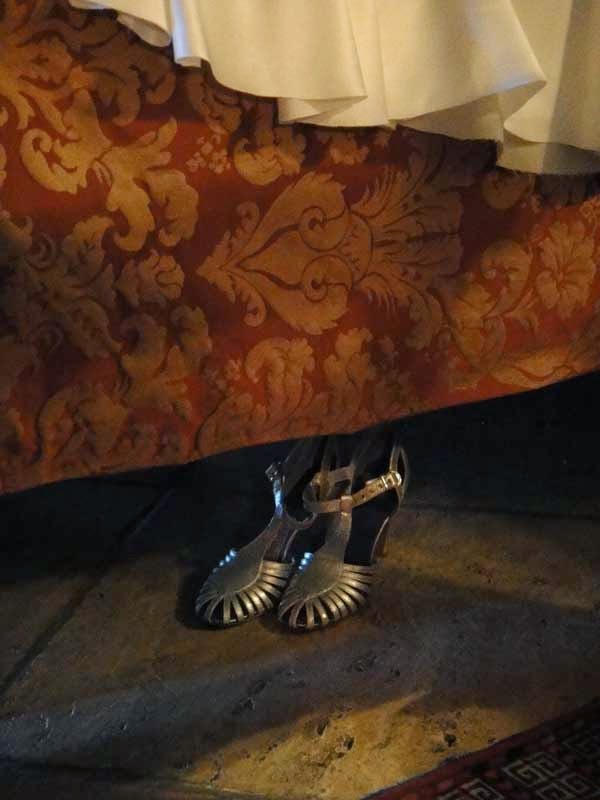 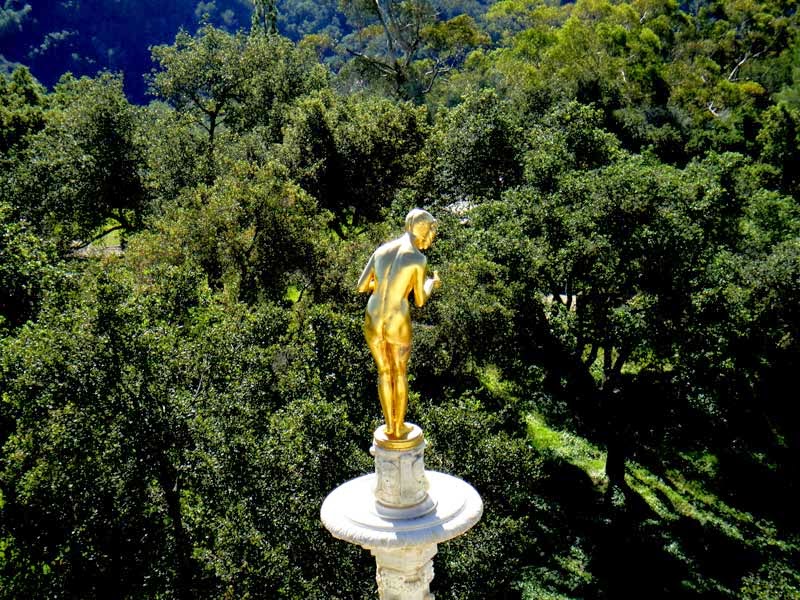 Ok, this is kind of interesting. The deco clock and the shoes are in Marion Davies' bedroom. Conveniently located steps from Hearst's room she was his mistress don't you know. Unlike the untalented character portrayed in Citizen Kane Marion Davies not only was a self supporting established actress when she met Hearst but she also paid some of his bills when he was down on his luck late in life. Is that gold statue her? I'll say yes. It's discreetly located off the the side in the back where the building was left unfinished at the time of Hearst's death. 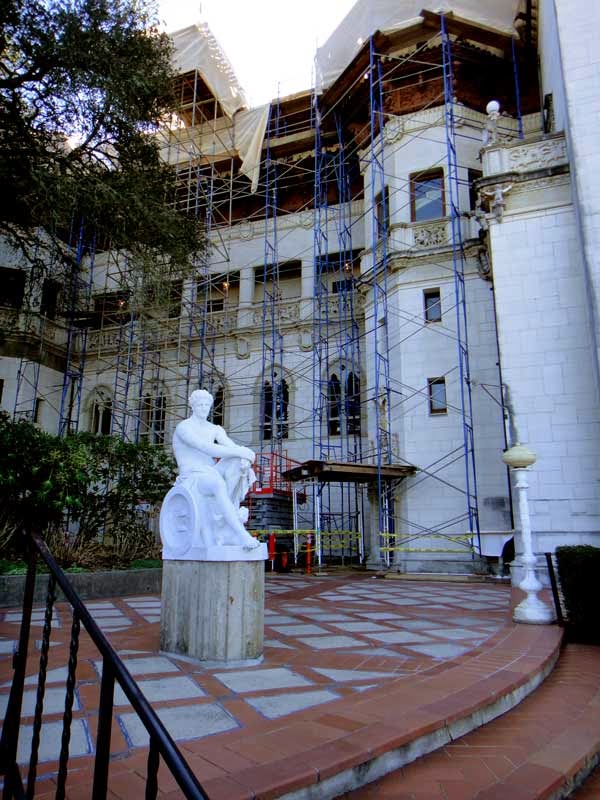 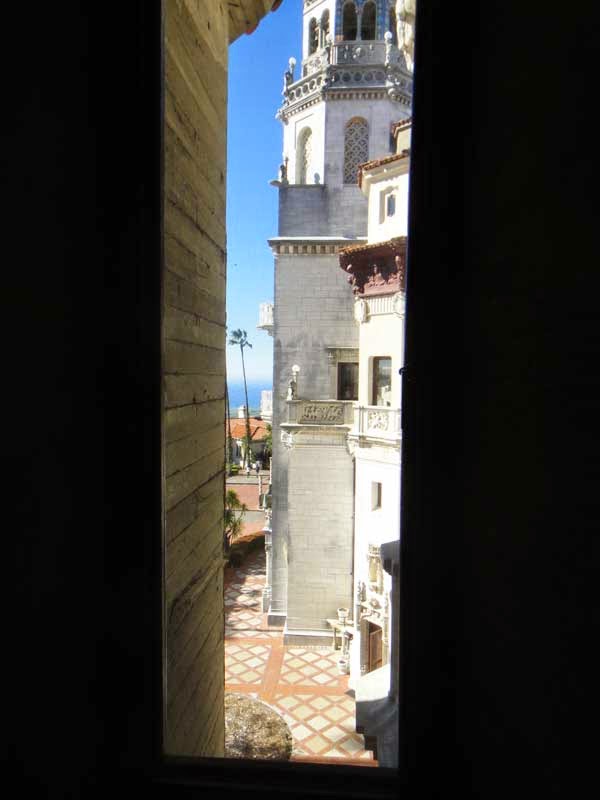 Now, just think of the upkeep. Actually, don't bother; you've got your own problems. The only problem our tour guide had was remembering the term "scaffold" and how to get past it to take us on a tour. So she asked around as we waited a bit and -we're in (!) and looking out to see views like the shot directly above. Swaying palms, the ocean, perfect weather. It's California you know. 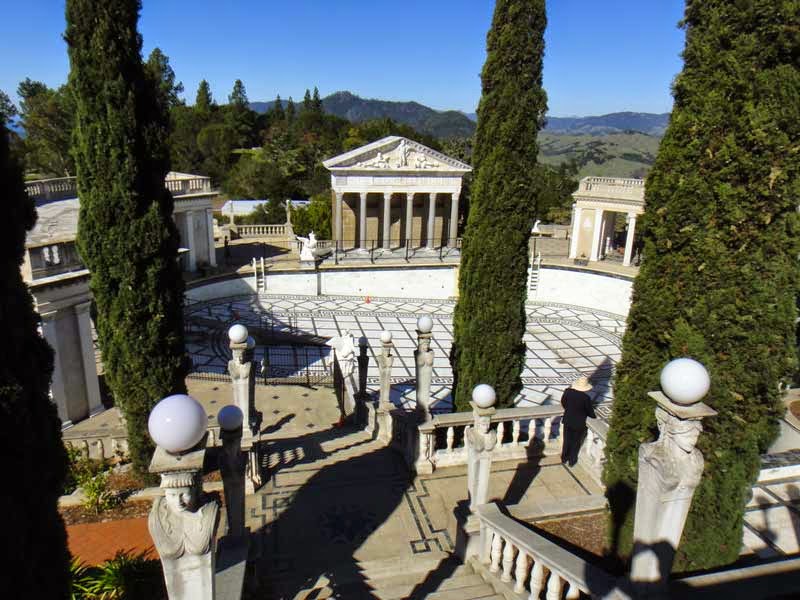 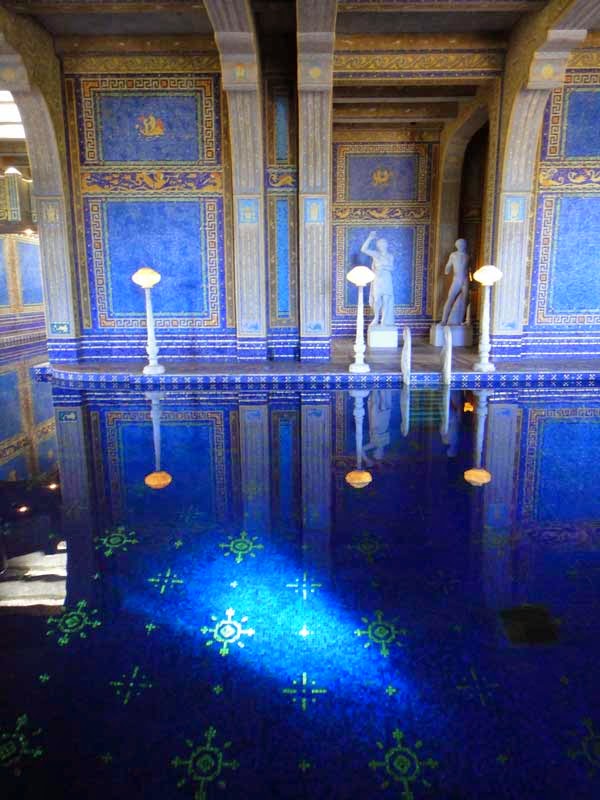 I leave you with the famous pools that all visitors want to accidentally fall into and be forced to swim around in circles, leisurely, until being thrown off the property presumably. Unexpectedly and undoubtedly a rare site the Roman pool was drained for maintenance. We learned in the visitor center movie: "Hearst Castle - Building the Dream" that the Roman pool started as a hot tub, was ripped out and replaced with a small above ground pool, then finally they dug this really big hole and got serious, or something like that. The indoor Neptune Pool had this brilliant patch on sunlight reflecting off the gold tiles. And that's how the tour ends. You exit through the pool house. Not a bad way to go.

See the movie if you can. The DVD is cheap and the movie is schmaltzy but not intolerable and it's a start. The whole Hearst Castle business is a growth industry. I feel certain there's more to come, more movies, more products, more kinds of tours. There's even a group called Friends of the Castle determined to, well I'm not exactly sure what they're determined to do but take a look at their site. They've got a slew of interesting pictures of parties they've had at the property, bad plein air paintings, and typical website boiler plate nonsense.

Will you share with me your very own Hearst Castle stories in the comments?