I remember trepidation the moment I first touched a brush to a wall with the intent to paint something other than just a single color. It's thrilling too because I think it's a primal urge, a relic behavior, like cave painting. After you start painting imagery on walls you notice that sort of thing more. Actually I have a vivid memory of noticing an instance of murals years before I became a muralist. It was in the movie: 3 Women. Tellingly the director, Robert Altman, said of his work as a film maker, "I look at it like a painting". His movie is absolutely fascinating, conceived in a dream and dream-like itself. 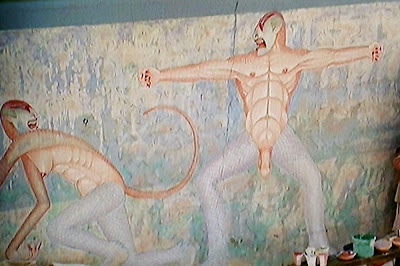 Janice Rule plays the dark and mysterious painter and but it was Bodhi Wind behind the scenes who conceived and painted the murals for the sets. The imagery is fantastical and ultimately symbolic of the dynamics in the narrative and subtext. There are creatures which I interpret as not so much male and female but apsects of our personalities: Jungian, Freudian, or what have you. It's been tucked in the back of my mind ever since. I mean I've not only been haunted by the film, the characters, and the paintings, but also the idea of wanting to paint a pool. 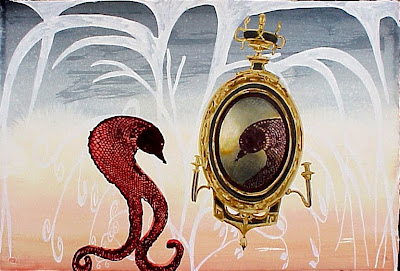 In the movie there are actually a number of instances of Bodhi Wind's paintings including the opening and closing credits. There are two pools, one is derelict and empty, the other filled with water. Both ideas have an appeal as a blank canvas. An unfilled one might be a skateboard park. That could be fun and add an extra vertiginous thrill for the skateboarders. I'm not sure what I'd paint but there is a sort of figure that appears now and then in my work that is reminiscent of the 3 Women paintings. It's slinky and scaly and has strange ways.
Posted by Scott Waterman at 3:03 PM