We Could Have Had It All


The Kingdom of the Father is spread out upon the earth, and men
do not see it. -Thomas or somebody.

In fact I'm pretty sure it's me. The quote above is mine. I said that, or rather something like it every time one of my clients misses the point of having it all that they fail to enjoy it. Look back into my past posts and you'll find a great example of this. We're approaching the one year anniversary of my Ojai project/non project. They could have it all.

How about a country? Would you like your very own? HRH The Prince of Liechtenstein asked me for the world and I gladly gave it to him. Okay, so he didn't exactly asked me directly, in person but on behalf of the LGT Group of the princely House of Liechtenstein I painted a world map mural for  their stunning San Francisco offices high atop the Embarcadero Center. Enter the marble stair way and you can see my work and find the locations of Liechtenstein Global Trust world wide.

This is one of my favorite types of commissions. The general direction is know but it's up to me to chart the course. I get just enough input and there's room for quite a lot of creativity. Paint a map, sure, but which one? I chose the less well known Peters projection rather that the very common Mercator projection. Principalities may seem like anachronisms but LGT is a modern day investment firm and Peters map shows the world accurately. Where Mercator shows Greenland and China as having nearly the same mass Peters correctly portrays China at close to four times the size of Greenland. Let's get it right people. 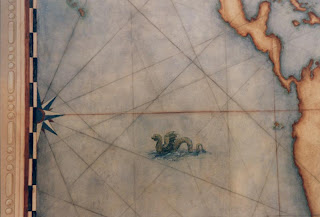 Still I give thanks  to Mercator and others for their useful and inventive annotated cartography. I thank you. I used many antique references showing landmasses, navigation lines, and various storied creatures upon the seas. The antique style seemed better suited to the crest and coat of arms of Liechtenstein which I also incorporated into my mural. And I indicated the world wide offices in a font completely based on Mercator's beautiful script. Ironically the San Francisco office is no longer among those cities listed. The office is closed. The whereabouts if this map is unknown to me.

Just like LGT the people in Ojai came to me with the idea of map and I said great, I can do that for you. See my previous blog post for some charming photos of this beautiful property. Now I take you inside to show you my map composite. These days my rough sketches; my cocktail napkin drawings are more likely a Photoshop collage. It's easier in a way and gives a good idea of what the finished work will look like in the space. I take the rough and make it real which in this case would have meant substituting what's all around Ojai. I would added charming little images of the local flora and fauna and shown the terrain. It's beautiful and inspiring country and what a perfect installation for an odd little stairway landing. They asked for and I had planned two other painting projects for the house. "Had" is the operative word.


We could have had it all! -Adele. Do you know the song: Rolling In The Deep? The video? I captured a still from the video. Have you noticed that strange abandoned room where Adele sits in front of a mural of a mountain-scape. My only reference for such a thing is Violet-le-Duc. He painted a mural of mountains for his own place, La Vedette. Isn't it wonderful? He's such a fascinating character. I used his designs in an early project of mine. Historically we owe him some gratitude for showing us the beauty of Gothic in a time when it was not especially fashionable. He wasn't interested in fashionable.


Remember to claim your kingdom. It's all around you.

Posted by Scott Waterman at 4:09 PM