The story of my mirrors is layered and long. I'll try to be brief in describing it which means I'll leave some out so I'll probably end up revisiting the subject. The title of this post is my version of "Artful Lairs", a story written and produced by Zahid Sardar for the San Francisco Examiners' Sunday supplement magazine, Image. I'm talking 1993 but even at this early date you can see, if you look very closely, a tiny mirror cut-out. I used it in a three dimensional collage. I took an exquisite 18th century bull's eye mirror in gilt frame and used it in an irreverent way. The bullseye mirror image forms the "eye" in a surreal face made of flotsam. I made a number of collages of that sort and eventually scaled-up and translated the mirror into paint and graphite and other media.


Fast forward to the early 2000s by which time I had moved to Oakland and a much larger studio space, a Victorian store front, late 1900s. Since I had the room my work grew in number and size. I explored the mirror image further and showed a portfolio to Bamo. Pamela Babey bought one of my graphite mirrors on the spot and the seed was planted for a future project which turned out to be a boutique hotel in northern Italy. If you, dear reader, ever get the chance to visit the Villa Feltrinelli I wish you'd take a picture of my work installed there and send it to me. I've never been! My mirror painting hangs in a prominent spot and there are a few of works of mine elsewhere in the Villa.

Style Saloniste, Diane Saeks wrote a profile on Pamela for City Paper and the mirror drawing Pamela bought from me is there in her chic living room. Actually at home and at work too because one of my largest mirror paintings also hangs in the Bamo lobby.


Now move with me to Los Angeles because that's where the story continues several years later. My studio has shrunk in size and my mirror work turns intimate again. I take another mirror image portfolio to Jennifer Long at Film Art L.A. She sells my work for use in movies, TV, and more, and that's how my work ended up on the set for "Wright vs. Wrong". It's a TV pilot. I have no idea when and if it will air but Debra Messing and Carrie Fisher are attached. Almost at the same time another agent of mine, Joanna Burke , placed my work in the Pasadena Showcase house. I saw it there. It looked nice. Amy Devault did the interior design. 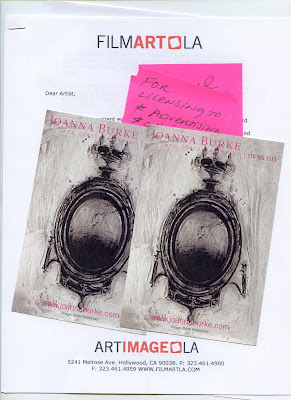 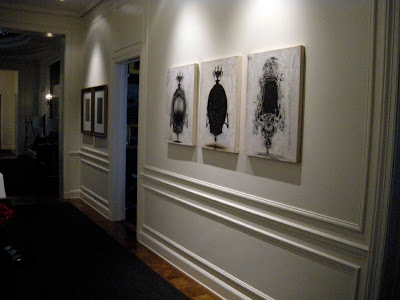 Stay tuned for more on this series. There's more to come!