Was everything better in the past? No, but when you look at the rich lives of Pompeiians you may forget that. I was too young or too immature to fully appreciate excavated Pompeii and Herculaneum when I visited in 1976 but we’ve all got a lot to learn from Pompeii. It’s possible we’ll never catch up since more is being discovered from this little seaside city once buried under volcanic ash. Even the 2009 exhibit at the L.A. County Museum of Art included recent discoveries from around the Bay of Naples that have never before been exhibited in the United States. 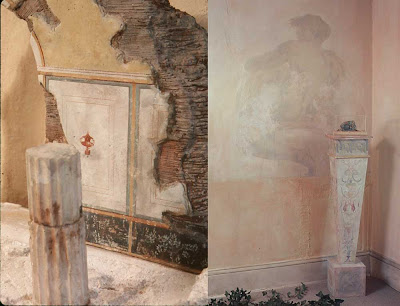 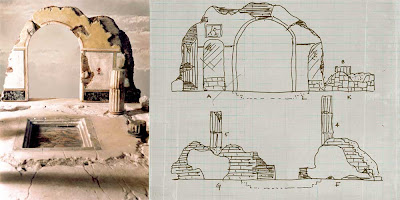 One of my first decorative painting commissions in the early 80s was a Pompeii style mural for an entry foyer. I was tentative and it showed but the influence of 79 A.D. got a hold of me I continued to express it in many subsequent projects. My last place in Atlanta was a classic bungalow that had been abandoned for years before I moved in. I utilized the pentimento and decrepitude with glazing and bits of imagery creating my own live in excavation. It was a great place to have fun with paint and no agenda.

Later I built and entire ruin from the ground up. I was invited to create a centerpiece for a table setting at a charity function. The event was a fundraiser for the Michael C. Carlos Museum at Emory University in Atlanta and concurrent with the exhibit: The Fragrant Past, Perfumes of Cleopatra and Julius Ceasar. My centerpiece was scale model of a Roman ruin. It’s not based on one particular ruin but it accurately demonstrates historic building techniques and borrows from Pompeii in the recreation of fresco and mosaic work. The base is made out a wood box topped with a weathered piece of sheet rock. The building fragments are cast plaster of Paris, hand carved and painted with acrylic. I even made tiny pottery vessels that would have held oil and wine. Are you getting a whiff of the fragrant past?
Posted by Scott Waterman at 3:24 PM